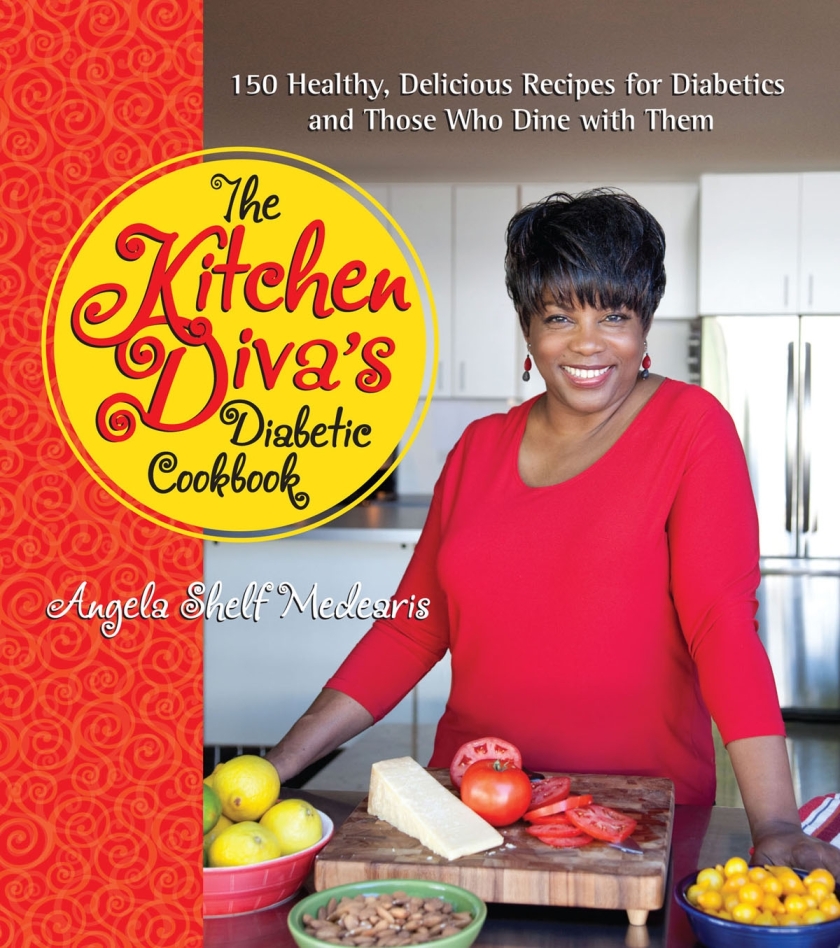 “People are eating African American food every day, but they don’t know it,” Angela Shelf Medearis says to me when we chat on the phone. In part, she’s talking about James Hemings who, in the complicated way of slavery, trained in the culinary arts in Paris and became a noted chef de cuisine and yet lived most of his life enslaved. Hemings either created or introduced a variety of the foods we eat now such as macaroni and cheese, ice cream, French fries, meringues, crème brulée, and French-style whipped cream.  Another dish he created that we don’t eat regularly if at all is his handwritten recipe for snow eggs–soft, poached meringue, set in puddles of crème anglaise.

Hemings was the son of Elizabeth Hemings, an enslaved woman and  John Wayles, the man who “owned” her. The two had six children together.  Wayles also had a more traditional family and his daughter Martha married a plantation owner named Thomas Jefferson. Thus, James was the half-brother of  Martha Jefferson who “inherited” James  (that’s so creepy I even hate writing it) when Wayles died. James was eight when they all came to live at Monticello. His youngest sister, Sally was just an infant. To make matters even more complex, after Martha died and Sally reached some type of maturity—she was probably in her mid-teens, she became Jefferson’s mistress and had six children by him, four of whom lived to adulthood.

So, Sally Hemmings was Martha Jefferson’s half-sister, and her children were half-siblings to Martha and Thomas’s children. I only mention all this to show how intertwined Black and White families were and also how the foodways of both merged.

But while Hemings introduced the Frenchified cookery to America,

Medearis, the founder of Diva Productions, Inc., the organization that produces her multicultural children’s books, cookbooks, videos, and audiocassettes, points out that people weren’t eating black-eyed peas before Africans arrive in this country.

“Back then they even thought tomatoes were poisonous,” she says. “But when they shipped slaves, they also shipped  the foods they ate with them  because that was a cheap way to feed them,” she says. “The recipes for those foods traveled from one place to the other. If they stopped in the Caribbean or South America before coming here, then the recipes changed with the foods and spices available and the types of cooking techniques.”

Medearis, a television chef known as the Kitchen Diva, has written 107 books. Many are children’s books, but she also is a cookbook author focusing on both the historic roots of African American cookery and healthy eating like The Kitchen Diva’s Diabetic Cookbook: 150 Healthy, Delicious Recipes for Diabetics and Those Who Dine with Them.

But she didn’t start out to be a cook.

“I only cooked enough that social services wouldn’t come and take away my children,” she says with a laugh. But her mother, after she retired, decided she wanted to market her raisin pie for some extra income.

While her mother and sister did the cooking, Medearis who often wears feather boas during her TV appearances and on her PBS cooking show and isn’t shy about being in the limelight, did the marketing.

But when her mother and sister decided to quit, Medearis knew she had to learn to cook if she wanted to keep her food business going.

Now she’s so full force that celebrity chef and restauranteur Bobby Flay arrived for a Jerk Chicken Throwdown while she was marinating jerk chicken for a family get. It was for his Food Network show Throwdown with Bobby Flay.

Who won I ask?

“My chicken had been marinating for hours,” Medearis replies. “He just arrived from Manhattan and threw some spices on his chicken. It burned. I beat Bobby.”

Though she originally didn’t cook Medearis had written several loved historic research. Did I know that George Washington Carver drove a food wagon around to introduce people to healthy foods?

No. I knew that Carver, who famously said, “There is probably no subject more important than the study of food,” was born a slave and became a botanist, author, educator and agriculturalist. He also collaborated with auto magnate Henry Ford on growing peanuts and soybeans.

And don’t even get her started on Carver and black-eyed peas.

“Black-eyed peas, okra, peanuts and sesame seeds, and the oil they produce, are documented contributions from Africa via the slave trade to our American cuisine,” she writes in her syndicated column. “I prepared black-eyed peas any number of ways while doing research for my first cookbook.”

That would be The African-American Kitchen: Cooking from Our Heritage, a best seller that even now 30 years later is considered a standard on the foodways African Americans bought to this country.  The problem though was getting it published. Her award winning children’s books were published by Dutton and when she brought the idea for her cookbook, she found an editor there who loved the book. But the editor at the next level turned it down, saying he’d published an African American cookbook almost 30 years earlier and no one bought it. He didn’t think the country was ready for another.

What’s a Kitchen Diva to do? Make a peach pie, of course, as it’s representative of both Black and Southern food history.

“You could hardly get a peach pie anywhere back then in Manhattan,” says Medearis. Wrapping up both the peach pie and the manuscript, separately we presume, she sent both off to the publishing company.

She got the contract.

“That book sold so many copies it was crazy,”

Overall, she’s written 107 books seven of which seven are cookbooks. Published in seven languages, she’s sold a total of 14 million books. But despite that, she’s not ready to stop.

“People ask me when I’m going to retire,” says Medearis who lives in Austin, Texas. “Why should I? I’m having a lot of fun with it. I’m doing what I want to do.”

“This is a quick and healthy version of New Orleans-style gumbo,” writes Medearis about this recipe, which was published in her book, the . “Using frozen vegetables is a real time-saver when making this tasty stew; it’s also the perfect way to use kohlrabi when in season. Select small, tender okra pods for this recipe, and don’t slice them until right before you add them to the stew.”

In a large pot, heat 1 tablespoon of the oil over medium-high heat. Add the yellow onions, carrots, celery, garlic, bay leaf, jalapeño, salt, pepper, and thyme and sauté until the onion is translucent, about 3 minutes.

Using a slotted spoon, transfer the vegetables to a plate, leaving as much oil in the pot as possible. Add the remaining ½ tablespoon of oil. Stir in the flour. Cook, stirring constantly, until the flour begins to turn golden brown, about 3 minutes.

Gradually whisk in the broth and cook for another 5 minutes, whisking until smooth. Bring the mixture to a boil, then reduce the heat to a simmer. Add the chicken, potatoes or kohlrabi, and zucchini. Return the sautéed vegetables to the pan. Partially cover and simmer, stirring occasionally, for 20 to 30 minutes.

Add the okra and cook for 15 to 20 minutes. Remove the bay leaf. Serve over ½ cup of rice per person and sprinkle with the green onions.

Angea Medearis, the Kitchen Diva, wrote one of her syndicated columns on creating Do-It-Yourself recipes.

“Basically, a DIY dinner recipe is about finding a way to retain the flavors of the recipes you love while using the ingredients that you have on hand,” Medearis writes. “If you have always wanted to free yourself from the restraints of a recipe, now is the time to do it! Think of the current lack of ingredients as permission to tap into your inner chef.”

To ease into creating your own DIY dinner recipes, Medearis suggests starting by making a pot of chowder.

“No one really knows the origin of the term chowder,” she writes, “but whether it came from French, Caribbean, Portuguese or Brazilian cooks, the basic meaning is connected to the large pot that the meal is cooked in.”

Medearis is a history buff paritcularly when it comes to food.

“Chowders were introduced to North America by immigrants from France and England more than 250 years ago. Native Americans called the dish ‘chawder’.” she says noting the word interpreted as “chowder” by early settlers and fishermen in New England.

“The original versions of the dish consisted of a pot filled with a mixture of fresh fish, salt pork, leftover hardened biscuits (which were used as a thickener), onions, water and whatever spices were available, writes Medearis. “A chowder is a delicious way to use the ingredients you have on hand to create a meal that does not require extensive prep or simmering for hours. My recipe for Seafood and Sweet Corn Chowder uses the basic techniques.”

My recipe for Seafood and Sweet Corn Chowder uses the basic techniques for making a chowder, but is designed to accommodate the need to vary ingredients based upon what you have on hand or what you can purchase at the store.

Whether you decide to make a seafood or vegetarian chowder, feel free to create your own version of this DIY dinner.

If you don’t have all the vegetables, seafood or spices on hand, omit or substitute the ingredient with what you do have. This chowder will still be delicious without it!

1 to 2 large Russet potatoes, or 3 red skin or Yukon Gold potatoes cut into 2-inch cubes, about 2 to 3 cups

2 cups frozen corn, thawed, or 1 (15-ounce) can whole kernel or cream-style corn, or 6 ears sweet corn, husk and silk removed, or frozen corn on the cob, thawed with kernels cut from the cobb

2 cups heavy cream, half and half

1. Place the butter or oil into a large saucepan or Dutch oven placed over medium heat. Add in the celery, onion, green bell pepper, garlic or garlic powder, and 1/2 teaspoon of the salt and pepper, dill, tarragon or dill pickle juice, and the cayenne pepper or red pepper flakes. Saute, stirring occasionally until the vegetables are tender, about 4 to 5 minutes.

2. Stir in the broth, stock, juice or water, potatoes, carrots and the remaining teaspoon of he salt and pepper. Cover and bring the chowder to a boil.

3. Reduce heat to low; stir the mixture, cover and simmer for 40 minutes or until the vegetables are nearly tender. Stir in the corn, cream or milk, and the salmon, shrimp or cooked crab meat (or a combination of seafood). Simmer on low heat for 10 to 15 minutes or until heated through.

Here’s the Jerk Chicken recipe that won the Throwdown with Bobby Flay.

Place the chicken pieces in a large baking pan and pour the spice mixture over them, coating each piece well. Cover with plastic wrap and place the chicken in the refrigerator to marinate 12 hours or overnight, turning once.

Allow the chicken pieces to come to room temperature before grilling. Heat the grill until the coals are somewhat white with ash; the flame should be low. Place the chicken on the grill and cover with the lid. Grill for 30 to 35 minutes, turning pieces to cook evenly. Baste pieces with remaining marinade.

For more information including recipes, https://www.medearis.com/