The dazzling 1893 World’s Columbian Exposition brought 27 million people to Chicago which was no small feat given that the first gas powered automobile is credited to Karl Benz in Germany in 1886 and Henry Ford’s 1908 Model T was the first car easily accessible to people other than the wealthy.

The crowds came to see all the newest inventions like the Ferris Wheel, the zipper and Cracker Jacks, diet carbonated soda, Aunt Jemima syrup and pancake mix and Wrigley’s Juicy Fruit gum. Plus it was at the Exposition that Pabst Select won the Blue Ribbon in the beer competition and hence forth became known as Pabst Blue Ribbon beer.

But there were other attractions less awe inspiring or recognizable but as important if not more so.

1500 botanicals (a term used to describe seeds, berries, roots, fruits and herbs and spices) were brought from around the world to the exposition to the Field Columbian Museum (now the Field Museum). Among the 40 million objects belonging to the museum—only 1% of which are on display—the majority of these botanicals remain.

Megan Williams, Director of Business Enterprises for the Field Museum, started a beverage program around seven years ago in celebration of the museum’s 125th anniversary. Her idea was to use some of these botanicals as a way of connecting the museum’s past and present.

“I am not a researcher here,” says Williams discussing her background, “though I used to teach environmental science. I joined the Field museum as an account manager and then took over the restaurant. I wanted to create a sense of community, a place for people to sit and talk and what better place for that than a bar.”

Combining the communal ambience of a bar with the awesome history of the museum was one of the reasons Williams started the beverage program.

“I wanted to educate people through taste and smell, to be able to taste or smell something that has a historic significance,” she says.

Williams described it as an opportunity to bring people together who love spirits and love learning.

“It’s not just putting a museum label on something though there’s a legitimacy in that,” she continues, noting she’s worked with brewers and wine makers as well in developing Field branded drinks. “But we wanted to take it another step further, working with people who have a passion and understand the museum’s language and mission.”

Contacting the Journeyman Distillery in Three Oaks, she invited Matt McClain, Journeyman’s lead distiller and owners Bill and Johanna Weller to view the botanicals to look at the botanicals.

“The first spirit we talked about was rye, that ended up as the last one made,” says Williams.  “We asked questions such as what would work well in making gin—what could–out of these 1500 botanicals—and where could we source them.”

McClain spent several months researching the botanicals that were at the museum, to determine their history as well as their availability.

“I found that a lot of them were not considered safe or even poisonous,” he says. “Standards were different back then.”

From there, he and Bill Weller chose those they thought would be a good fit for the spirits they wanted to create.

The first product they created was their Field vodka using Bloody Butcher Corn, an heirloom variety often used for making bourbon. The vodka then served as a base for the next distilled spirit, their Field Gin

“We wanted to make a global gin,” says McClain. “So we were pulling species from around the world. We narrowed it down to around 50.”

But once they had the botanicals and began developing recipes, they had to cross off a few more from the list.

“A lot of botanicals that look and taste good, don’t work where you put them in in alcohol, others that I wanted to use were hard to get or arrived too late, I still have agave in the cooler,” says McClain, noting  they used other criteria as well in the selection process. “Bill and I wanted the gin to be lavender focused. Obviously gin also has to have a heavy juniper taste as well. We wanted the gin to have tropical undertones and had to figure out those as well.” 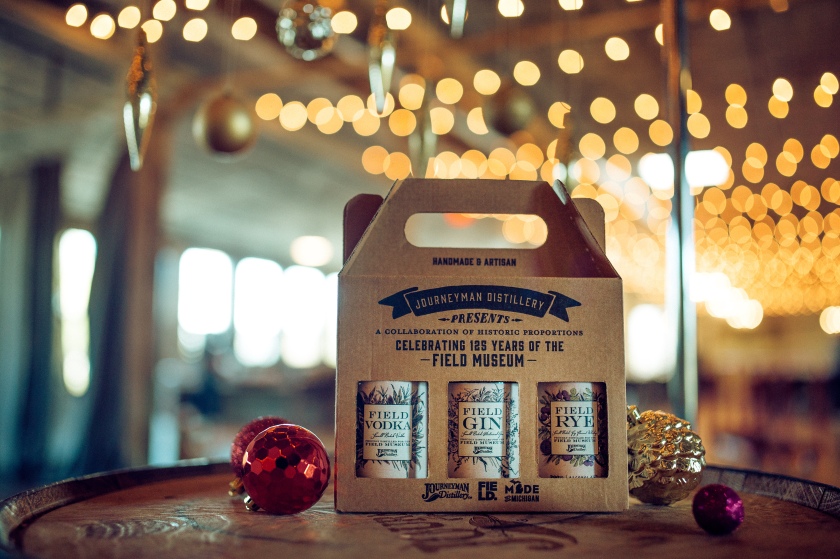 Then they were down to 27 including not only lavender and juniper berries but also prickly ash, anise, mango, ginger, coconut palm sugar, pineapple, papaya, Valerian Root, cinnamon, coriander, Horehound, star fruit and Charoli nuts which are sourced from India.

For their Field Rye Whiskey, they tried several types of figs which McClain describes as the world’s oldest sweeteners, finally deciding that Black Mission figs worked the best. The figs were macerated or soaked in alcohol for three months, a process that brought out subtle and all-natural flavors of bananas, sweet melons and strawberries.

“It’s an incredible whiskey,” says McClain. “It has heavy caramel notes and soft marshmallow like palate.”

Bottles of the Field distilled spirits are available for sale. For those who would like to learn more about their taste, they’re also used in some of the cocktails served at the Staymaker, Journey’s restaurant.

Beer, which is so Chicago given its rich German heritage, was the first partnership Megan Williams embarked upon when she started her beverage program. Two Chicago breweries, Off Color Brewing and Two Brothers Brewing were among the first to use the botanicals to create beers for the museum. researchers at the Field Museum have spent years excavating and studying the Wari site in Peru. Toppling Goliath introduced PseudoSue pale ale, a nod to the museum’s famous 40 feet long and 13 feet tall at the hip, Tyrannosaurus rex.  Physically SUE is the largest specimen T. rex specimen that’s been discovered so far.

Off Color’s introduced Wari, their artisan beer based on the Peruvian chicha, a purple corn beer native to areas of Central and South America. One of its other tie-ins with the museum is that Field scientists have spent years leading excavations at Cerro Baúl, a remote mountaintop citadel which was the only contact point between the Tiwanaku and the Wari, considered two great kingdoms whose dynamic relationship ultimately contributed to the rise of the Incan Empire. According to Off Color’s website, an essential sacrament shared by both cultures revolved around chichi. It seems that both tribes liked to consume massive quantiles of chicha served in ornately inscribed drinking cups called keros that were discovered during the archaeological expeditions at Cerro Baúl. In this way, Wari and Tiwanaku cemented their relationships. In other words, next time you see a bunch of heavy alcohol consumers at bars, understand they’re just continuing a thousand year ritual similar to that of the Wari and Tiwanaku.

The following recipes are courtesy of the Journeyman Distillery.

Stir ingredients and pour into a rocks glass, over ice. Garnish with dehydrated orange wheel.

Shake ingredients well and strain into a tall glass over ice. Garnish with a fresh lime wheel.

Combine ingredients and dry shake before adding ice to the shaker. Wet shake until froth has built up. Strain into a Collins glass and top with soda. Garnish with Star Anise.