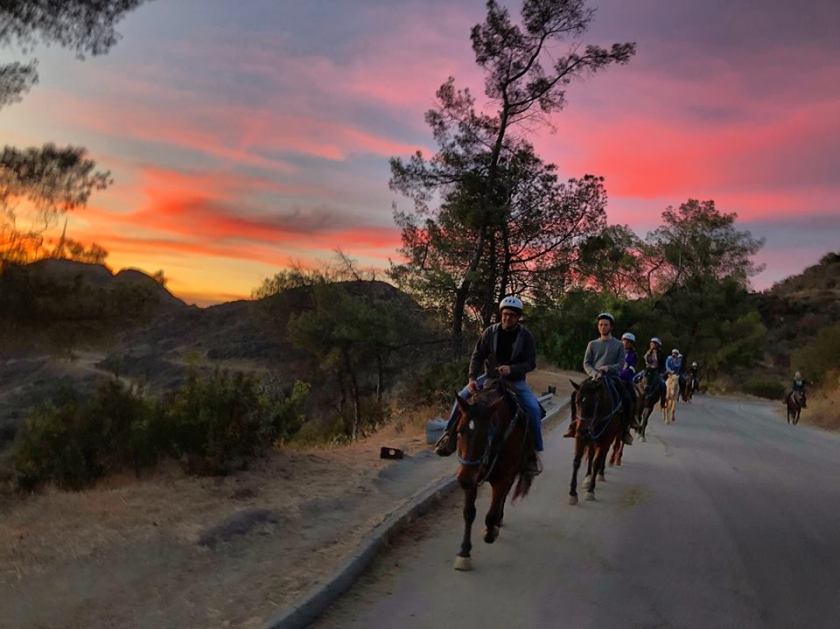 We took a wrong turn off of Hollywood Boulevard and suddenly found ourselves winding and twisting along the narrow streets of Beachwood Canyon. The homes, built in the early part of the last century were intriguing, but more so was that, for most of the drive, we could see the old Hollywood sign — 45-foot-high letters erected in 1923 as an advertisement for Beachwood Canyon and now a famous Los Angeles landmark. Keeping our sights on the sign and wanting to get closer, we drove further into Beachwood Canyon, sometimes losing sight of the letters and then, rounding a curve, finding them again.

One last turn took us to a dead end and the beginnings of the Hollywood Hills. And here we made another find, Sunset Ranch Hollywood the last dude ranch in the greater L.A. area.

The Ranch has been in operation since the 1920s, which is when the original red barn was built. It’s still used as the main facility at the ranch, which has the look of better days gone by. But we could tell from the signs that they offered trail rides and my kids and I, avid trail riders when we visit new places, were eager to try it. Deciding it must be karma, we pulled into the parking lot and walked up the steep incline to the stables. Soon we were saddled up and riding along a dusty trail (how Hollywood Western is that?) through the hills of Griffith Park, one of the largest urban parks in America.   It’s quiet up here—all sage,dirt and tumbleweeds  but I catch glimpses of the ocean in the distance and below me is the sprawling environs ofLos Angeles.

Along the way, there were numerous signs telling us that horseback riding is a very dangerous activity but that didn’t deter us. After all, we’d been driving in L.A. for days, even during rush hour, so how bad could going a max speed of five miles on a horse be?

Sunset Ranch looks like a set from an old Western. Wood fences penned in masses of horses (some 65 live at the ranch), sagebrush and tumble weeds dotted the landscape, which was desert-like with spiked cacti and agave.

The trail we followed led us along a dusty path up into the hills and away from the urban landscape. Sunset Ranch advertises 52 miles of trail and views of downtown L.A., Hollywood, Santa Monica, Glendale and, on clear days (our guide was a little vague as to how many clear days there are in L.A.), Catalina Island.

Footnote: Though I thought I’d discovered a hidden Hollywood find,it seems like Kathie Lee and Hoda have been there as well, along with actor Dean Cain. Oh well.

The Sunset Ranch also offers a trail ride and barbecue package as well. Indulge your inner John Wayne and sign up.