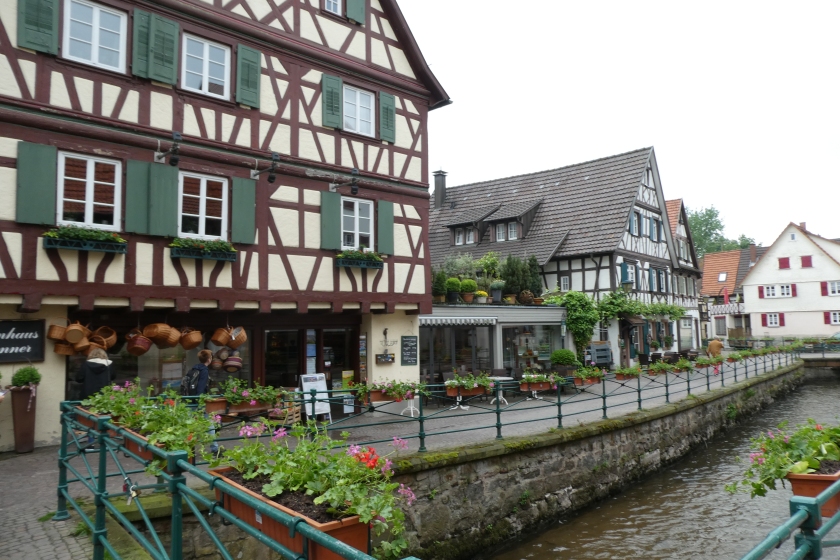 Following the Muhlbach Stream as it  gently flows through downtown Oberkirch, a marvelous collection of timber-framed, multi-stories houses, cobblestone streets, brightly painted shutters and window boxes overflowing with cascading blooms, we bounce along in Martin Renner’s topless  Range Rover into the vast orchards and vineyards, climbing the ever narrowing road up the verdant hills of the Black Forest. 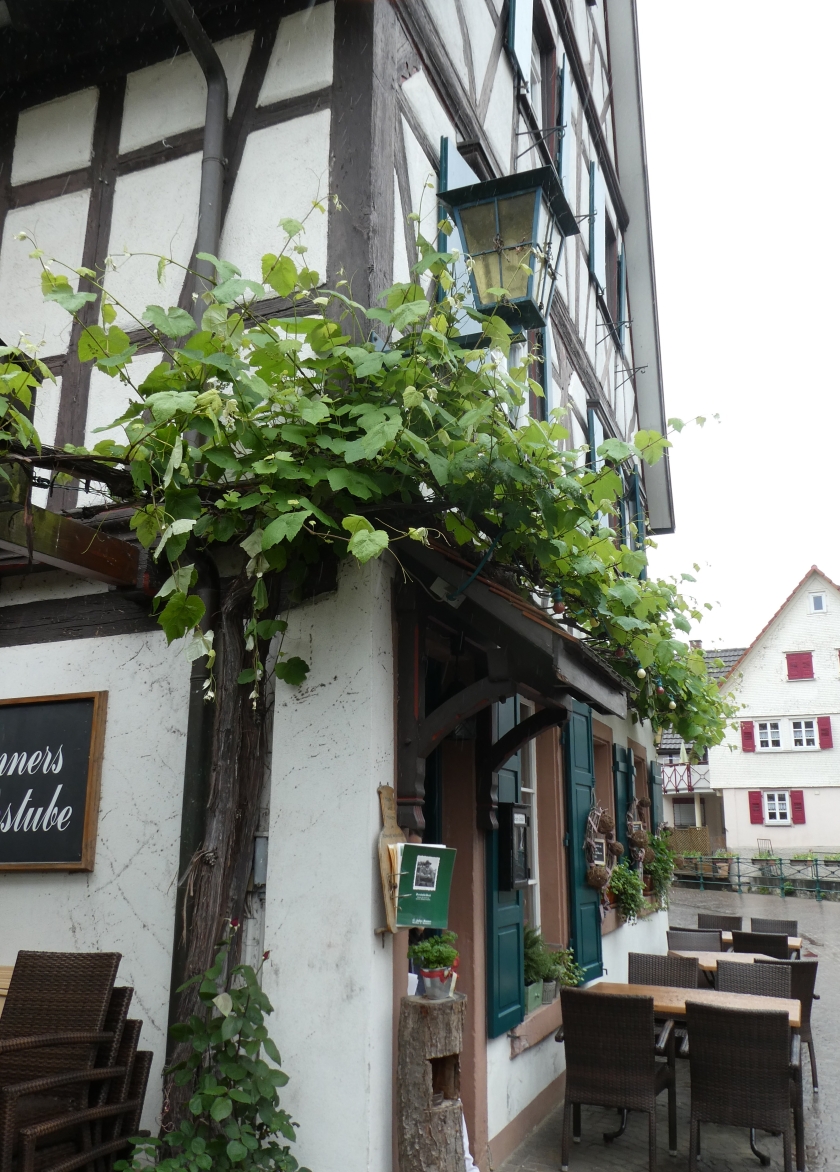 The journey is Renner’s Weinburg Safari, which in better weather includes both the Range Rover ride and a hike. But today it’s raining and though Renner, who is giving the tour, has handed us layers of warm clothing, I’m guessing that the reason why none of us are complaining about getting pelted by rain are the samples of wine we had earlier at Julius Renner Weinhaus & Weinkellerei, his family’s third generation business founded by his grandfather, Julius, in 1937.

The wines we tasted are made from the classic varieties such as Klingelberger, Muller-Thurgen, Ruländer and Blauer Spätburgunder that thrive in the special climate and topography that makes this part of the Black Forest perfect for growing a cornucopia of luscious fruit. As usual, I’m impressed not only by the quality of German wines but also their low cost. Indeed, their Pinot Rose Brut is 9.99 euros and the dry Oberkircher Blanc de Noir, made from Blue Pinot Noir grapes, goes for 5.99.

To add to the picturesque scene, lovely even in rain, the Renner vineyards are nestled beneath the ruins of Schauenburg Castle, a long abandoned citadel built in the 10th century, part of the dowry that Uta, Duchess of Eberstein, the richest heiress in Germany at the time, brought to her marriage to Duke Welf VI in 1131.

But if we’re looking for real history, Martin Renner tells me after we’ve returned to the weinhaus, housed in what was once a butcher shop built in 1708 (you can tell by the sketch of a butcher’s clever along with the date on the building’s corner edge),  you won’t find it here. After all, he says, as if the event just happened a few months ago, French troops sacked Oberkirch, burning the Medieval village to the ground in the late 1600s during one of those interminable European wars—this one lasted 30 years which is much better than the 100 year war waged by the French and British from 1337 to 1453. As an aside, if you’re wondering about the disparity between the dates and the name of that war, they took a few years off to rest before fighting again.

There’s disdain in his voice about the newness of it all and I try to explain how in America, old is anything built before 1950 and that we probably have fewer than fifty or so buildings in the entire country dating back to 1700. But then this is Germany where you can walk into the Kessler Champagne cellar in Esslingen and when you ask the guide how old the place is, there’s a nonchalant shrug accompanied with the year 1200 as if it’s no big deal. So maybe 1708 is a little too nouveau after all.

Next door to the wine store, the Renner Wine Tavern is all cozy Germanic charm. The menu is intriguing and very reasonably priced and more so when I make the conversion from Euros to dollars for such items as lamb chops with rosemary potatoes and homemade garlic sauce,  Walachian trout with creamy horseradish, Strasbourg sausage salad with Gruyere cheese and spaetzli–those wonderful German dumplings often baked with ham and cheese. There’s also bread served with either butter or Bohnert’s apple lard. Lard is frequently on menus here in southwest Germany and it is amazingly delicious. A quick fact check: Pure lard, rendered from pork, is much healthier—yes, really—than the oleos and processed shortenings we consume here. 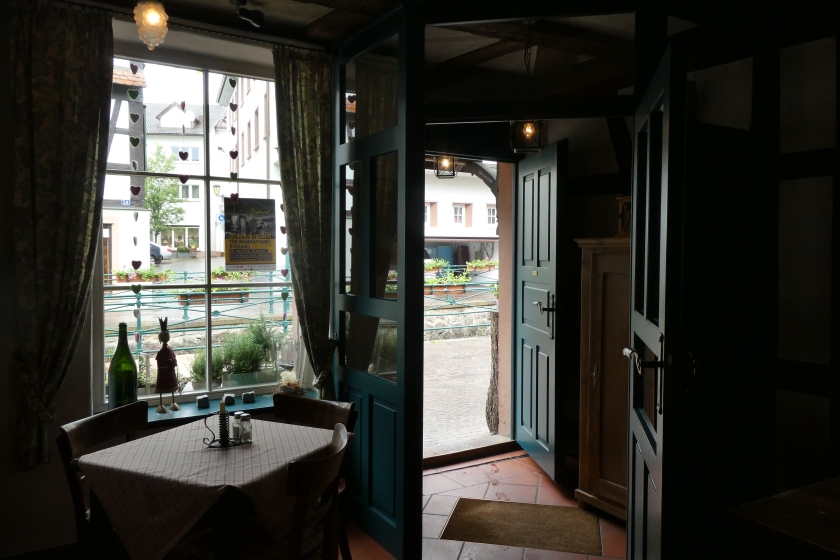 Noticing that the restaurant doesn’t open until 6 p.m., I ask why so late?

“We’re farmers and wine makers,” Martin, a graduate engineer in viticulture and oenology, tells me. “We don’t eat until then.”

Karotten or karotten in bier gedunstet (carrots in beer) and spaetzli are both on the menu at Renner Wine Tavern. Here are Americanized versions of those dishes.

Cook for another 2 minutes and serve hot.

In a large bowl, combine the flour, salt and pepper. In a separate bowl, whisk the eggs and milk together. Making a well in the center of the dry ingredients, pour in the egg-milk mixture. Gradually mix well until the dough should be smooth and thick. Let it rest for 10 to 15 minutes.

Bring 3 quarts of salted water to a boil in a large pot, then reduce to a simmer. To form the spaetzli, hold a large holed colander or slotted spoon over the simmering water and push the dough through the holes with a spatula or spoon. Do this in batches so you don’t overcrowd the pot. Cook for 3 to 4 minutes or until the spaetzli floats to the surface, stirring gently to prevent sticking. Dump the spaetzli into a colander and rinse quickly in cool water.

Melt the butter in a large skillet over medium heat and add the spaetzli and toss to coat. Cook for 1 to 2 minutes and then sprinkle with the chopped chives.  Season with salt and pepper before serving.