Brilliant displays of flowers, vignettes of garden arts, a cast iron bed frame painted white and cozy sitting nooks, a pond, a memorial to a dear friend and such unique structures as a Japanese Garden are all components of the lovely garden created by Grace Gianforte, a two-acre extravaganza celebrating nature’s beauty. In keeping with the woodlands in the back of her more formal gardens, Gianforte and her husband, Peter Katz, maintain the Pier Nature Preserve, a meandering board walk lined by tree trunks leading across bridges, crossing a small stream and offering glimpses of semi-hidden delights—a circle of stained glass placed in the grass, birdhouses, a copper lantern and planters of flowers—is open to all the neighbors on Pier Road, a short road paralleling Lake Michigan north of St. Joseph in Hagar Shores, Michigan. Take a turn when wandering Gianforte’s garden and unexpectedly come across a peace garden, an intricately wrought iron bench and table, rolling waves of shrubs in different shades of luscious greens, a sign with a garden poem and ceramic birdbaths—it’s all a visual treasure hunt. 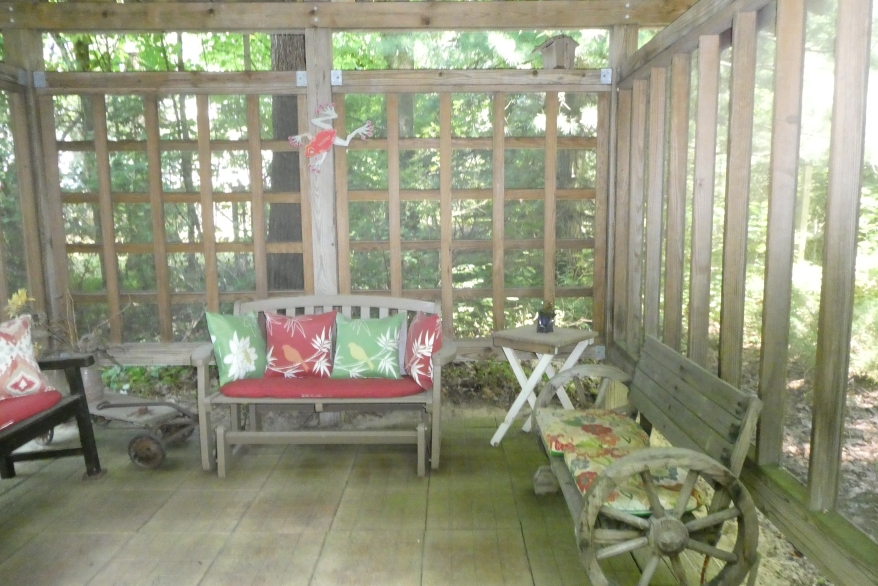 The gardens have been a passion for Gianforte who lives and works in Chicago a few days each week and then comes back to indulge in a flurry of creativity. Her home, built in the 1920 and located at 5023 Pier Road, is the perfect backdrop of drop-dead garden rooms but unique as it is, it’s just one of a quartet of fabulous gardens on display during the 2018 Symphony League Garden Tour on Sunday, August 5th from Noon to 5pm. The League, the non-profit support organization of the Southwest Michigan Symphony Orchestra, was organized in 1975 to raise funds for the orchestra and holds several very successful fundraisers each year. 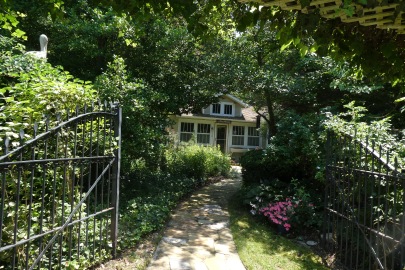 “We waited until August for the tour this year so that herbs, vegetables, and flowers will all be in season,” says Anne Odden who is co-chairing the event with Karen Johnson.

At the turn of the last century, Pier Road was a popular resort area and in 1915, according to the “Southwest Michigan RoadMap: The West Michigan Pike Volume II: Historic Resource Survey,” W. B. Pratt, owner of an area fruit farm since the 1860s, subdivided his land, opening a resort called Pratt’s Lakeview Park and later Pratt’s Resort. The history of the gardens on the tour are tied into this early history. Irish Catholics from Chicago vacationed here and the home belonging to Mike and Nancy Braun was once a retreat for nuns from Chicago and the garage/stable a place for priests to stay. Chicago’s Mayor Richard Daley Sr. supposedly vacationed on Pier Road before buying a place closer to Chicago in Grand Beach. The property where Donna Schinto has her house and gorgeous gardens was on property that was part of the Pratt Resort and the home of the Ferrantellas was a farmhouse set upon a large expanse of farmland which east past M-63 and south to what is now Midwest Timer.

The following gardens are on the tour:

““If you’re looking for pristine gardens, you’ll need to look elsewhere,” TJ Ferrantella writes to me in an email after I visited the gardens surrounding their second home on Pier Road.

Describing his flower gardens as being more likely to be maintained by a lawn mower and Round Up than by any other means, Ferrantella says that many of the concepts used in establishing the family’s extensive gardens were heavily influenced by Patricia Thorpe’s book The American Weekend Gardener, which advocates a realistic, low-maintenance approach to gardening.

Ferrantella has divided into his gardens and gives them names.

His favorite is the Bulb Garden defined by the birch tree and first established with the planting off over 1,000 bulbs.  True to his emphasis on easy weekends requiring little to no maintenance, this garden requires about one hour of weeding once a year.

“In Spring, it’s filled with yellow daffodils, progress to blue irises in late-spring, and to lilies in summer,” he says.  “We are often asked what is the greenery growing in the garden.  It’s fallopian japonica – both variegated and non-variegated and it was originally planted here to hide the leggy stems of the summer plants.”

The Frog Pond Garden located at the fork in the brick sidewalk was created so the couple’s now grown three son could play with frogs, the plant material around it immune to the damage caused by stomping kid feet.

Overall, the Ferrantellas’s garden areas offers a comforting and casual ambience. For lazing around there’s a hammock, for entertaining people have gathered in a pretty screened in porch, it’s door painted  a bright red that contrasts nicely with the yellow house and its white shutters. The hum of laughing voices mingles along with Here people have the musical sounds of chimes moving in a gentle wind and the clucking of hens whose coop is tucked under a tree house.  Tucked among the flowering bushes and masses of plants are pretty settings revolving around garden art and a wrought iron seating area.

Tucked along a high bluff overlooking Lake Michigan, when Nancy and Mike Braun first bought this late rambling 19th century home the land was barren and the buildings which not only include the house but a structure which because of its barn like doors looks like that it was, at one time, a stable before being used as a garage and guest quarters for those visiting the whoever was staying in the house. Mike Braun, a retired attorney, likes to build and he has turned part of the stable into a studio for his wife, naming it Nanistan. Also an attorney, Nancy creates her mosaics there and preserves flowers from her gardens. Inspired by a trip to England, she also built a garden wall out of stackings stones. 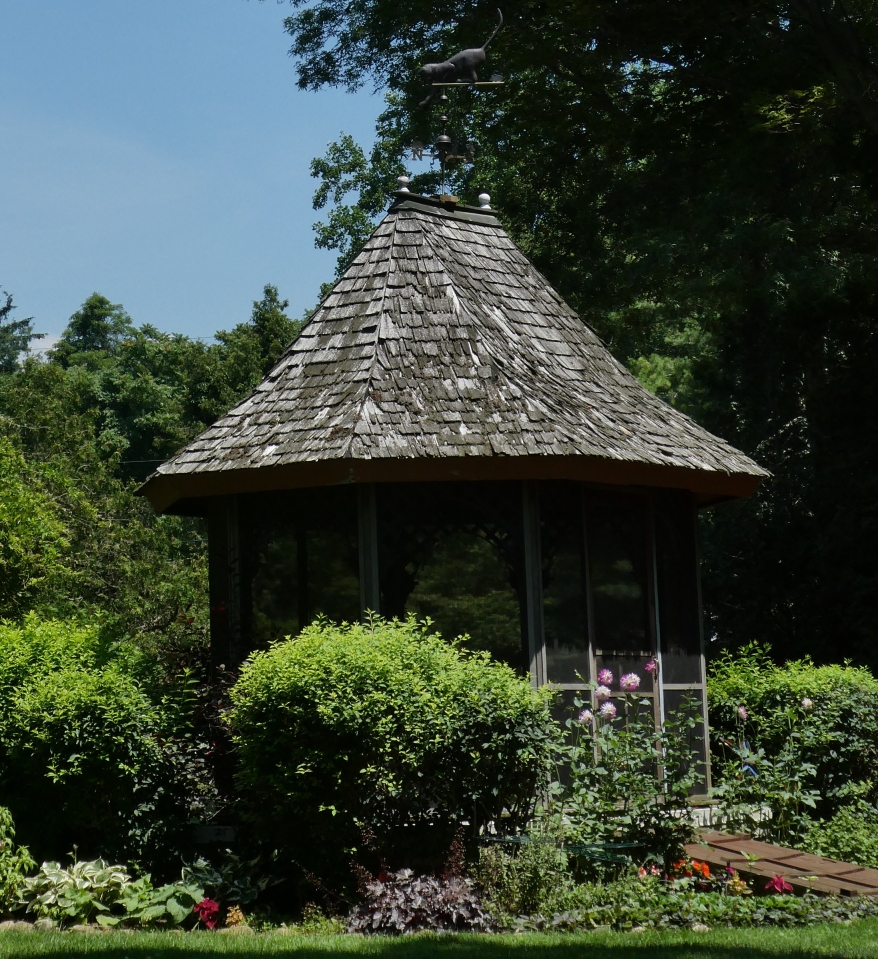 Nanistan isn’t the only structure Braun has restored or built, he also has added a gazebo, pergola and trellis in a garden area so large that some are tucked out of sight.

“There was another home there years ago,” says Braun pointing to an area now full of separate gardens, some filled with vivid blooms, an abundance of herbs like chives, oreganos, thyme, French tarragon, cilantro, basil, winter savory and marjoram intersperse with globe thistle which Nancy says looks pretty when dried, strawberries and Sweet William.

And because she has a cat, Nancy also grows catnip, a plant she says the feline delights in. 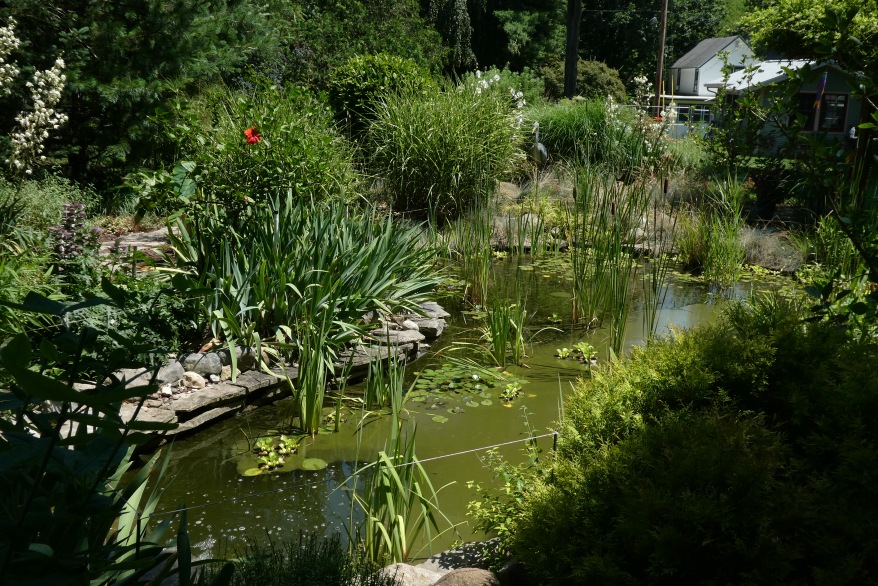 A large pond (dug out by Mike), bordered by hibiscus, iris, bear’s britches, candy tuft and buffalo beans with its spikes of yellow blooms, is accented with a flowing fountain and a statue of a heron.

The Brauns lived and worked in Chicago, for years coming up for weekends. But now, liking the peace and quiet of living on the lake, they now live here fulltime.

“We enjoy great sunsets and having friends visit,” says Nancy. “And, of course, working in our garden.”

Donna Shinto also lived fulltime in the Chicago area, but when she decided to sell her home in Glenview, Illinois and move permanently to Pier Road, she took much of her garden with her. Digging up her favorite plants, she transported 50% of what was growing in her yard to the 1.4-acres surrounding her home—a task that took many car trips to and from her residences.

But it was worth the effort. Shinto’s has fashioned a formal garden with garden rooms as well as fenced vegetable and herb gardens that invite visitors to explore. She uses art and statuary such as blue glass globes, a rustic metal rooster, huge pots of flowering plants, an old red pump mounted on a wooden box, a large geode with its interior crystals revealed, a pond circled by smooth stones and almost hidden by rich green foliage and a vintage toy Volkswagen, made of metal and painted in fading, slightly rusting colors of yellow, red, blue and green with a peace symbol on its hood.

Seeking to integrate her Glenview plants with the landscaping already in place—the property was once part of the Pratt Resort and boasts 12 majestic black walnut trees and large sugar maple with an 11-foot circumference and making sure the home fit in with her abundance of greenery, Shinto had the house designed and positioned so all fit in with the landscape. The mark of a true gardening afficianado.

When: Sunday, August 5th from Noon to 5pm (EST)

Cost: $10 tickets on sale at the SMSO office or SMSO website in advance or at one of the four gardens during the day of the event.