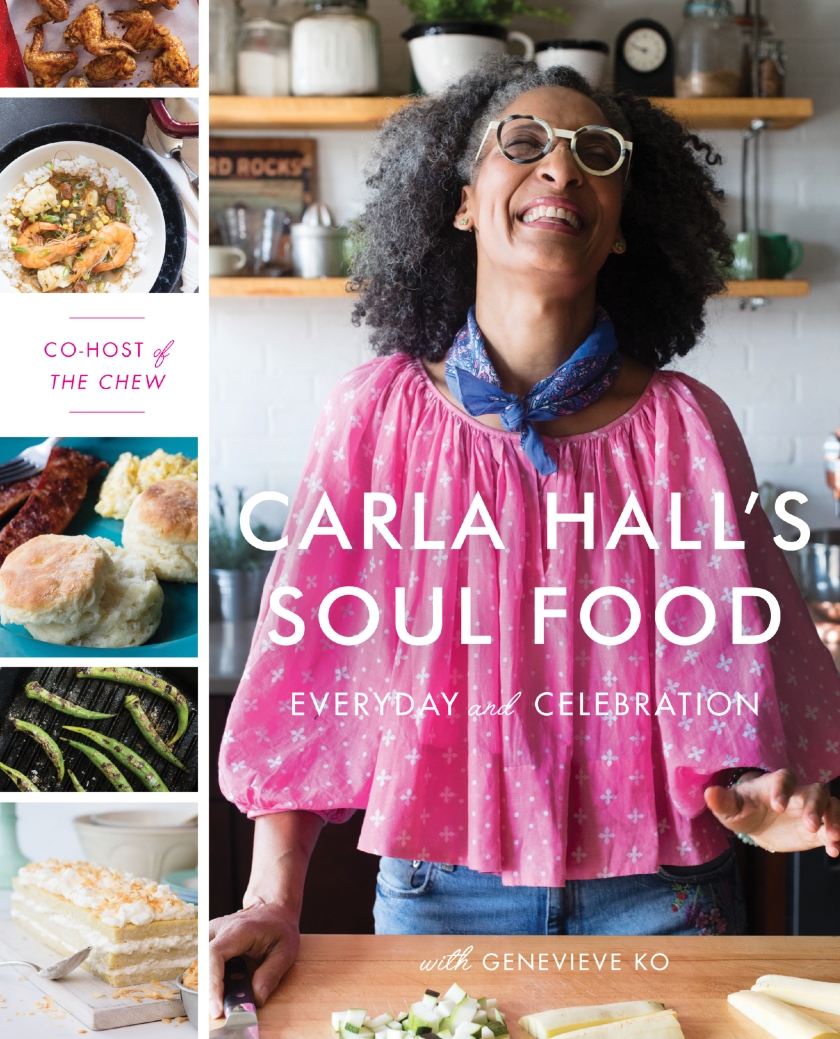 “I would love to walk into a room seeing everyone with big curly hair or different hairstyles, funky glasses and mixed prints,” Carla Hall tells me when I ask what it would be like if people attending her cooking demonstration at the KitchenAid Fairway Club during this year’s KitchenAid Senior PGA Championship at Harbor Shores in Benton Harbor copied her distinctive style.

The question came to mind after I clicked on “Get Carla’s Style,” a page on her Website. Hall is all in for a room full of Carla’s and if it happens, she says, an impromptu party would start immediately.

“By the way, it’s not too late for me to tell you what I’ll be wearing and purchase it for the whole audience is it?” she says. “LOL.”

Well, I’ll have to check with Andy Steinke, the HP’s feature editor, to see if that’s in the budget though I kind of doubt it. Besides, we don’t need to style like Carla to have fun—she creates her own party-like atmosphere  wherever she goes.

As co-host, along with Michael Symon and Clinton Kelly, of ABC’s Daytime Emmy-winning lifestyle series “The Chew,” Hall also appeared on Bravo’s “Top Chef” and “Top Chef: All Stars” where she wowed people not only with her culinary skills and philosophy of cooking with love but also with the catch phrase, “Hootie Hoo.”

Two years ago, she did a cooking demo at the KitchenAid Fairway Club to a standing room only crowd, entering the exhibit kitchen area doing a few dance steps and choosing kids from the audience to help her cook one of her dishes. She’s excited about being back in the area, her husband is from Kalamazoo and her mother-in-law from Benton Harbor. Plus since then Hall’s added a new skill to her repertoire.

“Since I was at the Senior PGA tour the last time, I was inspired to finally pick up a golf club somewhere other than a kiddy putt putt attraction,” she says. “I played my first 9 holes on a very prestigious course–no one else was on the course other than the other neophytes. I won’t talk about my score, but I did it. And I really enjoyed it. I’m looking forward to being back in the KitchenAid kitchen and teaching golf/cooking fans culinary techniques that I sometimes have to rush through on TV.”

One of the recipes she’ll be sharing this year is her Mac & Cheese Bundle.

“Think macaroni and cheese in tortellini form, bathed in a rich butter sauce and sprinkled with crunchy cheese and bread crumbs,” she says, immediately making me hungry. “Yep, a hole-in-one.”
With a degree in accounting, the Nashville, Tennessee native segued into culinary arts, studying classic French cooking at the L’Academie de Cuisine in Maryland. But it’s more complicated—and simple—than that. Her food is a blend of her Southern heritage and her culinary training and her number one goal is simplicity.

“The recipes in my cookbooks are approachable in both technique and in sourcing ingredients,” she says. “I even thought about the number of dishes you would use, especially in Carla’s Comfort Foods and my upcoming book, Carla Hall’s Soul Food. There are plenty of vegetarian recipes as well as a number of delicious dessert and comfort food recipes that my fans have come to expect from me.”

Hall’s newest cookbook, Cooking with Love is out this October and she says it’s loaded with recipes chronicling her life at her Granny’s table and in home and professional kitchens.

“I feel like the other two cookbooks, the experience of opening and closing my hot chicken restaurant and learning about my ancestral roots through DNA testing have all led to this book,” she says.

Having loved acting since she was young, Hall describes herself as “over-the-moon” at being on “General Hospital” for two episodes, starting May 16th.

She’s happy to hear that KitchenAid will again have copies of her cookbooks to be signed by her in exchange for donations to charities.

“Ever since I stepped foot into a soup kitchen over 20 years ago while in culinary school, I have been using my culinary skills to help others and to draw attention to issues around food insecurities in our nation and hunger relief,” she says. “When I found myself on a national television show, I made the conscious decision to use that platform to continue to help others and to give back. It warms my heart to know that the purchase of my cookbooks will be doing just that.”

FYI: For more information about the Senior PGA Championship, or to buy tickets, visit pga.com/events/seniorpgachampionship/2018 or call 269-487-3200.