I was invited to attend the International Puerto Vallarta Gourmet Food Festival, where chefs from around the world including the U.S., India, Sweden, Australia, South America and Europe,  join the executive chefs of the many sophisticated city restaurants, developing recipes and menus during the weeklong annual event.

It’s a great time and way too much food and for a break, our host Gustavo Rivas-Sollis signed us up for a decidedly less upscale but just as delicious street food tour through downtown Puerto Vallarta. The 1.5-mile, four hour tour met at Vallarta and Aquiles Serdán Streets in the city’s Romantic Zone where Ricardo, our guide, gave us a list of the places we’d be visiting and an overview of the history and culture of the foods we’d be tasting as well as some of the sights we’d be passing such as Nuestra Señora de Guadalupe, a beautiful cathedral with Renaissance-styled towers and magnificent views of the city and water.

The stops, he told us, would include small, family owned eateries like Mole Rosa where they made great enchiladas covered with different types of moles (the very time consuming rich sauce that uses a variety of peppers and sometimes a touch of Mexican chocolate) and El Güero where since 1989 the owners have shopped for fresh fish at the market early each morning, bringing back the best catch of the day to make their ceviche tostadas and other seafood dishes.

Not on our list, we also made an unplanned stop at the seafood market where Antonio from El Güero and many other restaurateurs get their fish. I was invited to go out at 3 a.m. the next morning to experience the actual adventure of fishing but declined not being that early of a riser. Besides, I figured having been surrounded by the bins of octopus, shrimp, snapper and tuna was experience enough.

To finish up, Ricardo told us, we’d walk the Malecón—the lively and long boardwalk which stretches along the bay– for a taste of tuba, a type of drink made from coconut palm juice, walnuts, apples, sugar and several other “secret” ingredients all of which were marinated overnight. This tuba vendor, he told us, got to work at 7 a.m and dressed in all white including a large white hat, sold his drink until late at night. Intrigued, I tried to Google a recipe for tuba as we walked, but alas couldn’t find one. That was because, Ricardo told me, tuba wasn’t well known outside of Puerto Vallarta.

Our first stop was at Robles Birria Tacos a more or less permanent food truck which has been in business since 1986. Luckily Ricardo has pull because there was a long line of people waiting to order but he was able to circumvent the queue. All the tables were taken and so once we got our tacos, we sat on the curb and ate—something many others were doing as well. 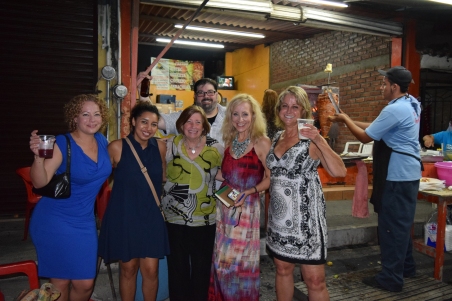 Cesar’s Coconut Stand was even less fancy. Set up on the sidewalk of Avenida Mexico, Cesar, who has been in business there since 1984, used a machete to slice open the hulls of coconuts he plucked from a large pile (he had even more in the back of his pickup truck which was parked next to the stand). Then using the tip of his machete, he gouged a hole in the top, stuck in a straw and handed one to each of us.

Ricardo described him as one of the busiest coconut vendors in the city, saying he sold over 900 coconuts a week. In what might be the ultimate drive through, people would pull their cars close to the stand, lower the window and place an order. Cesar handed them their drinks and bagged chunks of coconut meat in exchange for payment.  Ricardo extolled the vir

Probably less healthy was our stop at Con Orgullo La Azteca Candy Store, a crowded place stacked with bags and bags of candies made with regional ingredients such as guava fruit, papaya, coconut, cane sugar, vanilla and spices like cinnamon and nutmeg. More like a shrine than a bustling confectionary, the nearby Xocodivas, an artisanal chocolate shop, gave us samples and also a history lesson about the Mexican cacao bean which Ricardo assured us was the source of the world’s first chocolate and still the best.

Dash of Tabasco or a light pinch of cayenne pepper

In a non-reactive casserole dish, either Pyrex or ceramic, place the fish, onion, tomatoes, chili, salt, Tabasco, and oregano.  Cover with lime and lemon juice.  Let sit covered in the refrigerator for an hour, then stir, making sure more of the fish gets exposed to the acidic lime and lemon juices.  Let sit for several hours, giving time for the flavors to blend.

Chop cilantro into tiny pieces. Cut avocado into cubes. Fry tostados in oil until crispy. Top with fish mixture and then cilantro and avocado.

1 cup water or more as needed

Measure the liquid drained from the coconut, and add enough water to make three cups liquid. Place the liquid and the sugar in a saucepan and cook until the mixture thickens. Remove from heat, stir in beaten egg yolks and the grated coconut meat.

Return to heat and cook, stirring constantly, until the bottom of the pan is visible. Remove from heat and stir in the butter. Spread the cocada in a baking tray, sprinkle with cinnamon and allow it to cool completely before cutting into squares.