Not long ago I traveled with friends to Williams, Arizona, a tiny rodeo-type town on Route 66 which bills itself as the Gateway to the Grand Canyon. On our arrival we parked at the historic Williams Depot, got our tickets for the Grand Canyon Railway, in existence since 1901, and then headed down the tracks to where an old Wild West show had started. It’s all rather hokey with bad jokes and the sheriff in the end shooting the bad guys but still, taken for what it was, fun. The western theme sure set the mood for a trip to the canyon which I had never seen before and, on our way home, the sight of gunmen riding horses across the sage and coming aboard as part of an old fashioned train robber (spoiler alert—it was the same sheriff and two dead desperados who had shot up the corral earlier in the day). 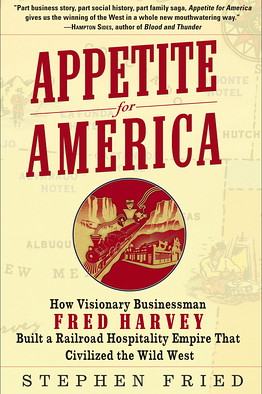 Boarding the vintage train (our car dated back to 1926, ‘27 or ’28 depending on which guide was speaking) powered by a steam engine, our journey started in a landscape of Ponderosa pines, descended slightly from 7000-feet as we passed through Northern Arizona’s Colorado Plateau which at 5000-feet is a mix of high desert and scrubby forests, rose to 12,600 feet at the highest point in state– San Francisco Peaks and then back down to 7000-feet when nearing the canyon. A musician made his way through the train cars playing—not the western songs I expected—but modern melodies (oh come on, no Red River Valley?) as we spotted herds of caribou and elk in the distance

The canyon itself, with its amazing vistas, was much more beautiful than any photograph but of course being food centric, I was interested in taking a tour of the Fred Harvey museum at Bright Angel Lodge, one of the restaurant/lodge complexes overlooking the canyon’s southern rim. 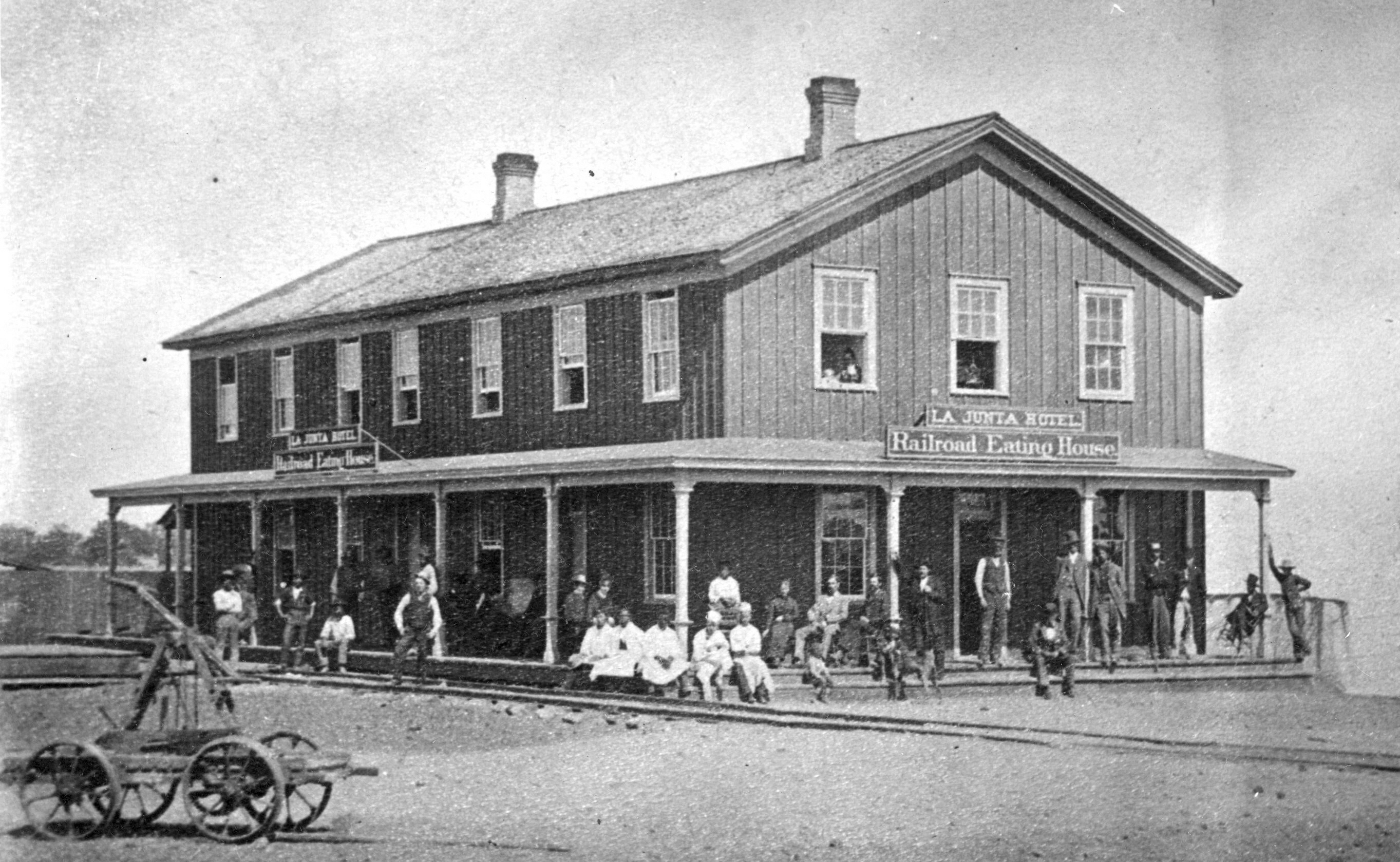 I was only vaguely aware of Fred Harvey, an Englishman who starting in 1853 built a string of restaurants and hotels along the Santa Fe Railroad and then Route 66 between Illinois to California. My friend Pete Racine, the late owner of the Grand Mere Inn in Stevensville, Michigan, had started his career working for the Fred Harvey company in the Chicago area where they had eateries along the toll road before going to work for Win Schuler’s in Michigan and then opening up, with wife Nancy, his own restaurant. But I was surprised to learn that in 1883 Harvey created the Harvey Girls–young, single, well-mannered, and educated American women (oh and they also had to be white) dressed in rather staid uniforms who served food in his restaurants. Being a Harvey Girl was a big deal—The Harvey Girls starring Judy Garland (as the sweet Harvey girl) and vampy Angela Lansbury as a sequined bar queen) was made in 1946 and based on a book by the same name written in 1942. Their uniforms and photos of the women through the years were on display in the one-room museum.

Some of menu items at the lodge’s Historic Harvey House Café where we ate had been around for a long time. The Cobb salad I ordered dated back to 1940, Chili con Carne first appeared in 1937 and the Ponderosa Chicken Club was even older–1938.

When I got home, I of course Googled it all and discovered that Stephen Fried, author of Appetite for America: Fred Harvey and the Business of Civilizing the Wild West—One Meal at a Time, which was named one of the top ten books of the year by the Wall Street Journal and the Philadelphia Inquirer, had started a website titled The Harvey Girl Cookbook Project. During his intensive research on Harvey, he’d come across hundreds of recipes that had been served in the restaurants, some dating back to the 1880s and decided to post them, asking others to post any they might have and also giving a history of Harvey, the girls and his empire.

The recipes are varied, some for foods that we probably wouldn’t order even if they were still on the menu such as Bull Frogs Sauté Provencal which is basically skinned frogs, dissected (their words not mine) and sautéed with mushrooms and tomatoes, Dandelion Soup (chopped dandelion greens and flowers cooked in milk) and calf brains. There are also recipes for food items we don’t see any more—Guinea Hen, Boneless Squab, Gansenmeir Stuffed Goose, Broiled Pig’s Feet, Calf’s Sweetbreads and Gooseberry Meringue Tart. Recipe styles include a lot of French terms—Epicurienne, Diable, Bonne Femme and Valencienne and older recipes are written in paragraph style like they did a century or more ago.

And, if you’re seriously into this, as I am starting to be, it turns out there are tons of people interested in the history of Fred Harvey and they even have a name—Fredheads. There’s an annual get together, the Fred Harvey Weekend, held this year in New Mexico, October 20-22. For more information facebook.com/events/1917935448430054

As for channeling Fred Harvey into your own kitchen, try perusing the recipes Fried collected. They’re a fascinating lesson in culinary history. I chose a few from the more than 500 Fried collected to include here. For more, visit fredharveycookbook.tumblr.com

Mix all ingredients, roll into small-sized balls, and bake on greased cookie sheet at 400 degrees for ten to fifteen minutes.

4 slices onion cut in half

With a meat cleaver, pound the steaks until they are flat. On each steak place a slice of bacon, an onion slice, and a pickle slice. Roll the steak around the onion and pickle and tie together with apiece of clean string. Spread the flour on a plate and roll the tied steak in it. In a heavy pan with a lid melt the butter or margarine and brown the floured beef rolls and remove them to a plate.

Add 1 tablespoon flour to the butter or margarine still in the pan and mix together. Add the beef broth, made from beef bouillon, and stir this mixture over low heat until slightly thickened.

Then put the browned beef rolls back in the pan, cover, and cook over low heat for 40 minutes.

Remove string before serving. Be sure to serve this main dish nicely as Fred Harvey would have done

Acknowledgements: The above photos and information is courtesy of Stephen Fried.