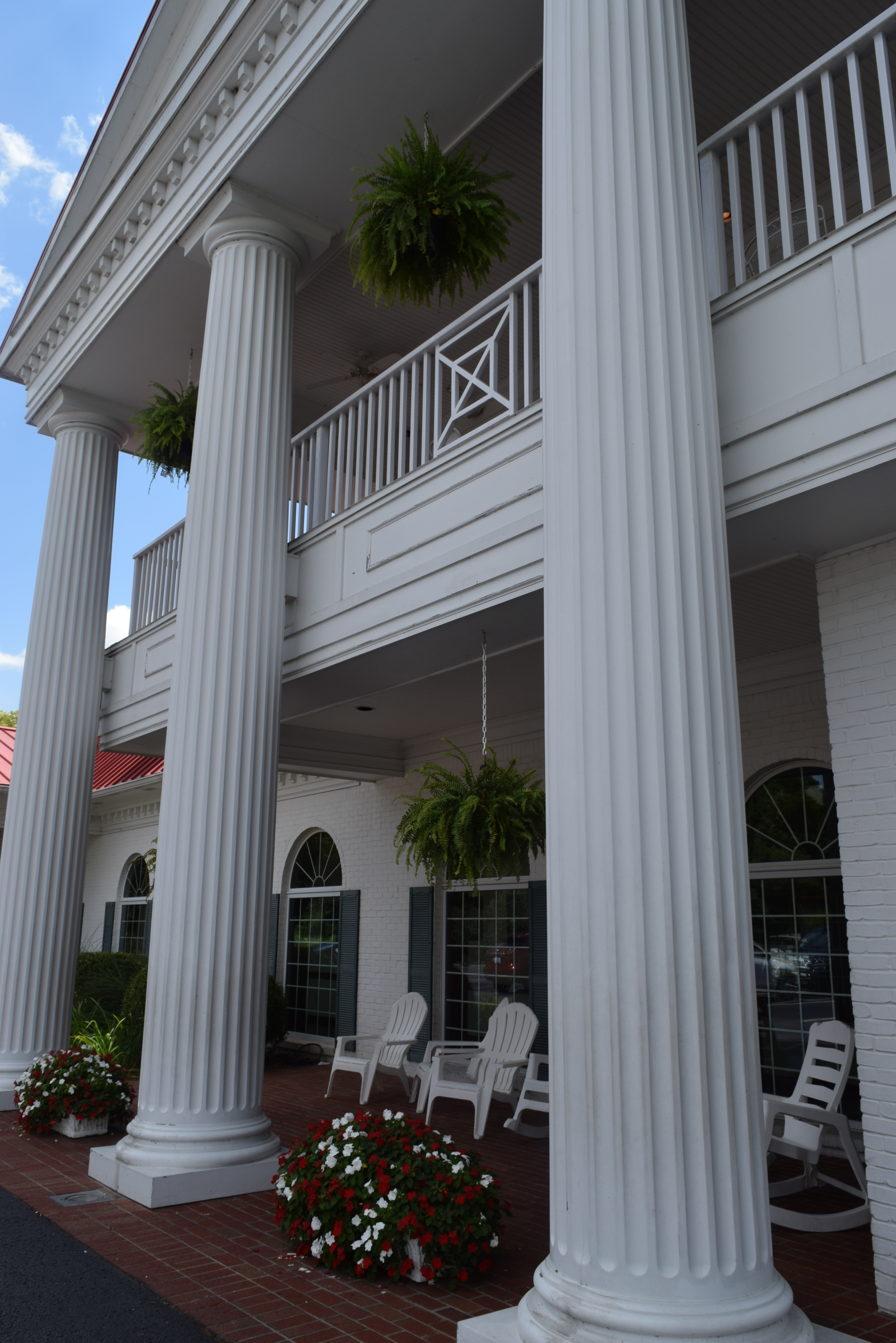 My first stop in Kentucky last week was at Claudia Sanders Dinner House in Shelbyville, a large Southern Colonial style building with a long front porch, tall white columns and a row of rocking chairs. It’s the type of place Scarlet O’Hara would have been comfortable hanging around.

If the last name Sanders sounds familiar, it’s because Claudia was the second wife of Harland, better known to most of us as Colonel Sanders of Kentucky Fried Chicken fame. And before we got any further, the title of Colonel is totally honorific, conferred by the governor of the state. It’s a Kentucky thing.

Claudia and the Colonel met when she was a waitress at the gas station in Corbin, Kentucky where he served his Southern-style cooking including fried chicken, gravy, biscuits, country ham, string beans, okra and other such fare. After word spread about how good the food was Sanders got rid of the gas station part of the business and enlarged the building to seat 142. 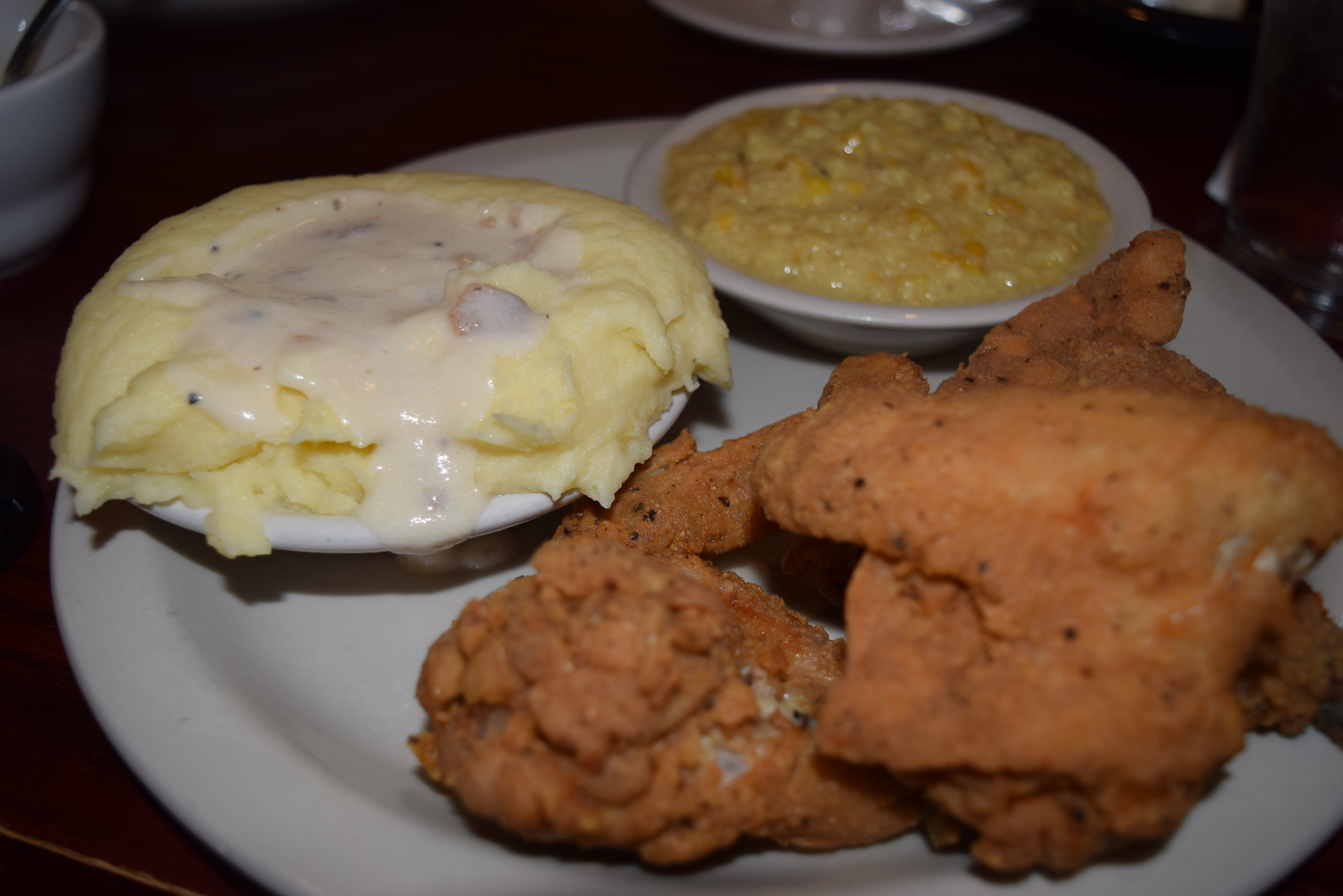 In the late 1930s Sanders restaurant was listed in Duncan Hines’ “Adventures in Good Eating” and for those of you who think Duncan Hines is just a brand of cake mixes, here’s an interesting aside. Hines was a traveling salesman who between 1935 and 1955 started compiling a list of restaurants that he recommended to fellow travelers. The list turned into a series of books and Hines also started writing a thrice weekly newspaper column which was syndicated in newspapers throughout the county.

Here’s his listing for the Colonel’s place.

Of course, eating at a restaurant associated with the Colonel and his lady (when the place originally opened it was called The Colonel’s Lady), I had to order the chicken as well as some true Southern sides—corn pudding, chicken and dumpling soup and mashed potatoes with milk gravy. If you’re shaking your head at the number of calories in this meal, at no time did we say it was lean cuisine.

Anyway, back to the Colonel and Claudia.

“The Colonel was a really good guy,” Charlie Kramer, owner of Kentucky Backroad Tours,
tells me over dinner (yes, I was eating again but more about this place in a future column). Charlie worked at the dinner house staring in the 1970s and so knew both Claudia and Harland.

It seems that the Colonel was a perfectionist when it came to cooking and not only did he come up with the secret recipe of herbs and spices that made the batter so “finger-lickin’ good” but he also realized that a new way was needed to cook fried chicken. The answer was a pressure cooker, a relatively new appliance in 1939. It was better than pan frying which took too long and deep frying which made the chicken greasy and dry. Pressure cooking not only sealed in the chicken’s flavor it also preserved its moisture without being greasy.

“He’d go around to these restaurants around Louisville and showed them a better way to make chicken,” Charlie told me. “He’d take a pressure cooker and the spices and herbs and show them how to do it. He’d ask them to pay him a nickel for every fried chicken they sold and he’d stop by later and collect the money.”

It may seem like an odd business model but it worked.

When I-75 opened, the Sanders Café was off the main road which is why Claudia and Harland moved to Shelbyville and opened the dinner club.

The Colonel eventually sold his business to John Y. Brown, Jr. who would become the governor of Kentucky and then later to PepsiCo and its name changed to KFC. The Sanders kept the restaurant where the original recipe is still being used. Both Claudia and Harland are gone now, but the restaurant remains very popular. It was crowded when I was there at lunch time on a Wednesday and it seemed like a lot of chicken was being served.

As for the recipe for the real Kentucky Fried Chicken, here’s one that is said to be real. I don’t know if that’s true but it supposedly was found in a home belonging to a Sanders’ family member when some remodeling was going on. The claim that it is the secret recipe (which is supposedly kept locked away and known by just a few people all sworn to secrecy) resulted in a long-running lawsuit between KFC and the family that says they discovered it. I do find it interesting that one of the secret ingredients is ground ginger—not an ingredient I’ve ever encountered in a fried chicken recipe before.

The Maybe-Secret-Original-Recipe for Kentucky Fried Chicken

Mix all ingredients together.

Thaw and cook spinach 4 minutes in salted boiling water. Drain and set aside. In a skillet brown the bacon and onion. Add salt and pepper. Set aside. In a saucepan bring the half-and-half to a boil.

Sift flour and salt together. Work in butter. Set aside. Dissolve yeast in lukewarm water or milk. Combine with egg and sugar. Add to flour mixture. Gently stir until blended.

Shape into rolls and let rise in greased baking pan for about 2 1/2 hours or until doubled in size.

Jane Ammeson can be contacted via email at janeammeson@gmail.com